"Anyone who does not believe in miracles is not a realist."  DBG 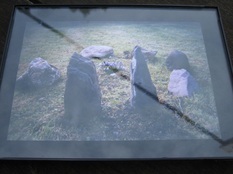 We relish the stories amongst us that move us (goosebumps), especially the kind of stories that shape/shift our world in marvelous ways. We are speaking real life, sometimes unfathomable non-linear yet tangible happenings and outcomes.

Inklings do invite us, though they are by nature ofttimes barely perceptible. They do not clamor for our attention as much else does in this world, and we have to have at least a whisper of a want to turn and catch their drift. It was this very edge-of-the-world place/experience that was the draw and the focus for a handful of 1930's Oxford scholars, including  J.R.R. Tolkien & C.S. Lewis. This vibrant group called themselves  'The Inklings' and honed what it took to delve into just such edges. We would not now have Lewis' Chronicles of Narnia without that willingness to at least turn and look at something that may otherwise have remained essentially frozen out of consciousness.

Inklings and miracles occupy a similar field of perception/inquiry in our lexicon;
Pause to notice
Hush to take in; something of magnitude Here occurred
Marvel that it is so
Each such response has its own resonance and reverberation.

There is a reason why Great Questions Foundation co-founder Eleanor Wasson, whose life story reads like Breakfast With the Stars, so readily charmed a sparkling array of characters in her long life. Eleanor had something real to say about miracles. They happen regularly and for her part, she was outspoken in her  appreciation of these tangible touchstone events in her life. Perhaps this quality of attention itself operates as an invitation across the ethers; the cosmic welcome sign on our inner door.

Eleanor writes: "The longer we live the more aware we become relative to the miracles in our lives... Recently I have been looking back upon what we might call minor miracles, but nevertheless tell us that we are all one and everything is energy."

She goes on to share a delightful string of synchronicities, from being in Egypt and walking right into the friend "in a population of 17 million people", the very friend  she had wanted to go to Egypt with, to the massive tree that destroyed her house but preserved every precious thing that mattered to her, to the amazing last words of her late husband George Wasson, whose swift descent into Alzheimer's took him from her but not before this last conversation between beloveds which happened as he slept that numinous night in their Beverly Hills home:

Eleanor: "Darling, because of your illness you are sometimes hostile, which makes me afraid. For this reason I am going to take you to the Motion Picture Home. I will come to see you every day and I will love you always."
George: "Dearest, continue doing your work, do not be afraid and be safe."

Eleanor recalls: "I was overcome with the knowledge that his higher mind was still intact. I cried with joy in this knowledge for I knew I would see him again as he had always been a wonderful, kind and intelligent man. He went on sleeping and when he awakened he was just as "out of it" as he had been."

Yes, we marveled at this story and reveled in its telling. We have sat in Circle as Women for more than a decade, gleaning this caliber of Herstory, more true life Stories than we can name.  We are endlessly richly shaped and re-shaped, the tapestry of tales woven with texture and colors and themes within us, with such deep appreciation for how our ever-morphing interwoven Stories become us!

"Anyone who does not believe in miracles is not a realist."  David Ben-Gurion
Powered by